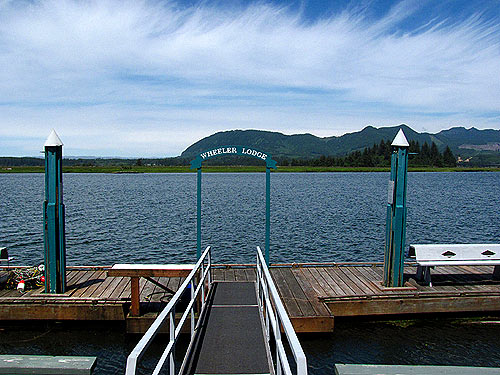 (Wheeler, Oregon) - Care for a particularly entertaining watery experience? It could be floating around Nehalem Bay. It could be bounding around the beach at Manzanita or Rockaway. Or maybe just some time in a hot tub.

Wheeler on the Bay Lodge, in – you guessed it – Wheeler, manages to encompass all those. This spot is a part of the north Oregon coast that gets a little passed by, quite literally, because it's part of an inland stretch of 101 that veers away from the beach. So people tend to whiz right through this tiny town of about six blocks in length.

The flipside of this is there are not many throngs to deal with. Thus, this little charmer of a lodging manages to stay a bit of a nifty secret to those who are in the know. 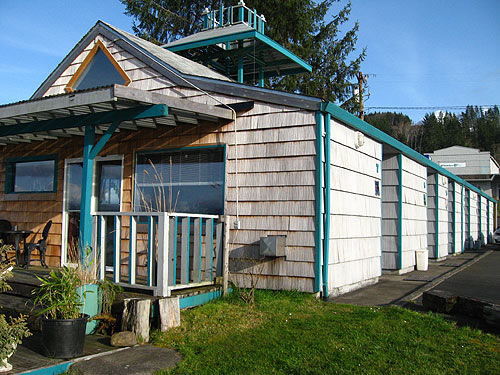 A few rooms are right on the bay, with those engaging views of all things aquatic happening out there. You can rent a kayak from here and go exploring the minute details and hidden marshes of the bay as well. Even better, anything longer than a two-night stay gets you a kayak run for free.

During the day this place is charming enough, especially with what amounts to your own private dock on the bay. At night, however, the lights and water become an ethereal experience. Highway 101, 580 Marine, Wheeler, Oregon. 503-368-5858. 800-469-3204. www.wheeleronthebay.com 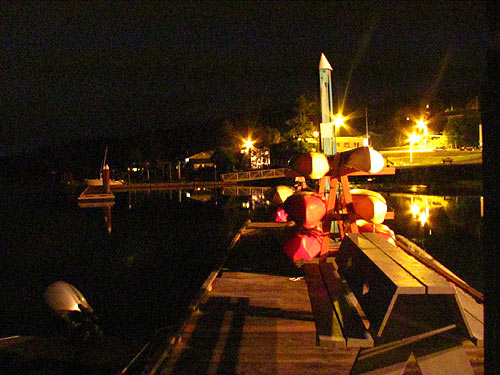 The bay at night, from Wheeler Lodge on the Bay's docks. Wheeler is just outside of Manzanita (about 12 miles from Cannon Beach).

More from the area below, and at the Wheeler, Manzanita Virtual Tour, Map.

Moderate Chances of Aurora / Northern Lights Over Washington / Oregon Coast. ...
Friday may be your best chance of viewing on the coastlines
Saturn Brightens, Jupiter a Monster, Still Some Meteors Above Oregon Coast, W...
Delights in the night skies are numerous, including Saturn in opposition
Raw Sewage Spill Closes N. Oregon Coast's Netarts Bay to Crabbing, Clamming, ...
Netarts Bay is near Oceanside and about 15 minutes from Tillamook
More Beach Wheelchairs Available for Oregon's Tillamook Coast Region
In Manzanita, Rockaway Beach, near Tillamook, Garibaldi, Pacific City, others
Lewis and Clark Live Re-Enactment Returns to N. Oregon Coast's Seaside
Sept 10 and 11 with the Lewis and Clark Saltmakers program. Seaside events
Three Die in Crash at Gleneden Beach on Central Oregon Coast Highway
The crash involved two vehicles and had tied up traffic all day
90 Years of Oregon Coast's Sea Lion Caves Celebrated at Florence's History Mu...
Party in Florence on Aug. 26. Florence events
When That Spectacular Glow Hits the Oregon Coast: Surprise Colors Between Yac...
The colors that would erupt around here were mind-bending