(Pacific City, Oregon) – If you blink as you drive by, you may miss it.

If you’re coming from the north, you’re heading down the Three Capes Tour through a winding stretch of thick forest canopies, and a variety of homesteads, ranches, and occasional glimpses of a bay through the trees. All of a sudden, the road straightens out and the treeline is filled with a variety of homes.

Then the trees disappear and the ocean explodes in front of you, and you ascend a hill to an ever greater view.

This is the village of Tierra Del Mar, near Milepost 10, along what is called Sandlake Road at this point, although somewhere between here and the top of the hill it becomes Kiwanda Drive. From this sandy expanse of beach, it’s two miles to Cape Kiwanda State Park, and this stretch is also where driving on the sand is allowed. 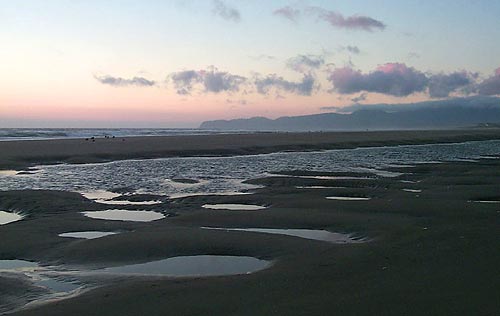 Pacific City is three miles down the road, or via the beach, if you’re walking (although you would have to walk over the massive Cape Kiwanda to get there via the sand).

There’s not much here, aside from a handful of streets running from the highway to the vegetation line, and some vacation rental homes. But that’s the charm. There’s really nothing but the beach. It has that old school Oregon coast vibe, with nary a business to be found: as if civilization's march of commercial progress hasn't touched it yet - not unlike the sleepy, even more clandestine Neskowin to the south.

Once you get past the drivable area, it’s a pristine beach as well, beautiful and serene, with views of Cape Kiwanda to the south and an often fuzzy, misty view of Cape Lookout to the north.

During the summer, the village does host some rather colorful festivals, however.

At this time of year, when sand levels are higher, the low tides make for interesting shapes in the sand. 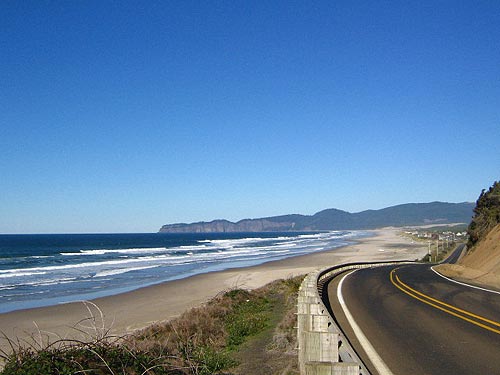 In winter, sand levels often get quite low here and beachcombing for agates and maybe even Japanese floats is prime.

If you’re coming from the south, you’ve just come from Pacific City and you’ve just stopped at the stop sign at the top of the hill. There, the vegetation breaks and a huge ocean vista pops up in front of you, sure to make you smile every time – and awe-inspiring in any weather.

This spot at the top of the hill is big for hang gliders as well.


To Previous Stop
History of Pacific City: How it was Named
To Next Stop
Tierra Del Mar Jump Off Point, Scenic Bluffs
Back to Three Capes Loop Virtual Tour Page