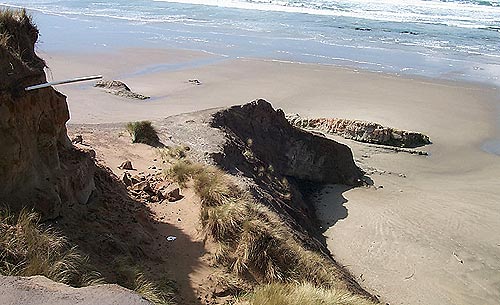 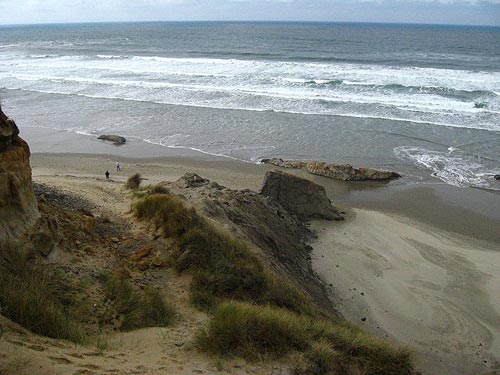 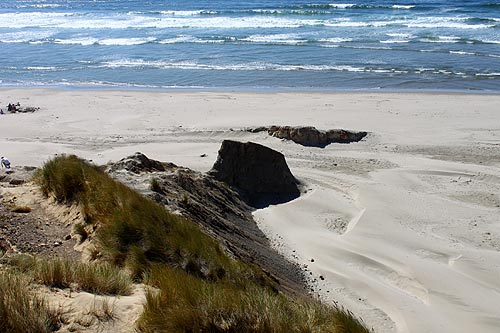 The ever-disappearing Jump-Off Joe. Remnants of the "new" structure, located about a quarter mile north of the Nye Beach Turnaround - and less than a mile from Agate Beach. Here you see photos spanning a little more than five years, and you can see - top to bottom - how it's disappearing. The top photo is about 2006; the two others span the next eight years.

The premonitory in Nye Beach now nicknamed Jump-Off Joe has a tale with several parts to it: one for each rock structure that bore the name.

About 1890, construction of the jetties at Yaquina Bay caused the tides to change, and a sandstone landmass jutting 150 feet into the surf eroded away. Within a decade, a large chunk of rock with an arch and something that looked like a dinosaur tail was left. This was named Jump-Off Joe, from a mix of legends from settlers and local tribes.

This was the original Jump-Off Joe.

As Nye Beach grew into a major destination, Joe caught the imaginations of visitors and locals alike. A.L. Thomas, a doctor and businessman, turned artful photos of it into a lucrative postcard business around 1900.

Erosion of Jump-Off Joe continued, and around 1916 the arch crumbled. By the '40s, almost all traces of it were gone.

For more on the Jump-Off Joe story, keep clicking......


To Previous Stop
Remnants of Jump-Off Joe
To Next Stop
Jump-Off Joe History
Back to Newport, Oregon Virtual Tour