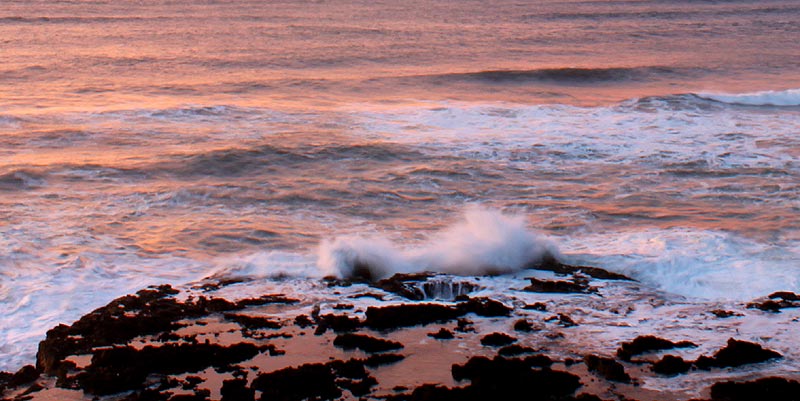 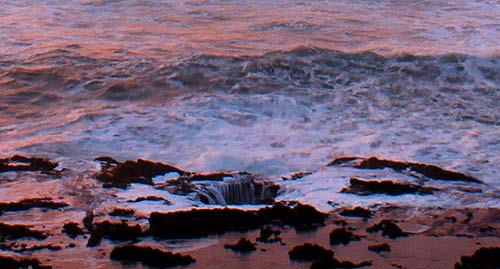 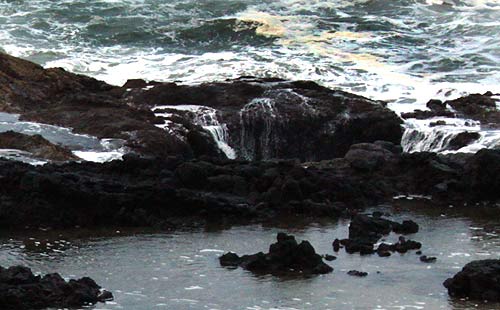 One of the more famed landmarks along the Oregon coast is Thor's Well, a large hole in this ancient basalt rock (about 40 million years old or more) along the Cook's Chasm marine gardens area just south of Yachats. At the edge of this sturdy ledge, this circular structure sits, allowing water to not only flow over and into it but gush out of it as well. There is enough space in one weakened area between the upper parts of the basalt and whatever rocky or sandy surfaces lie below to let ocean water in.

Millions of years of tidal and tectonic battering have eroded numerous cracks and crevices into these rocks. One big crevice about 30 feet to the north of Thor's Well squeezes the energy and force of the ocean into dramatic, fiery displays of water. Another crack immediately south produces that famous Spouting Horn that hisses and sprays upwards when tidal conditions are right.

Thor's Well is an example of such erosion, and one day the ocean will eat its way through the rock there as well. For now, it provides pleasant sights of water gently spilling into it, or it comes flying up from the hole as well. Meanwhile, dramatic ocean waves slam into the shelf itself and often completely engulf it. You can see video of just such action of Thor's Well at the bottom. Need a place to stay near here? 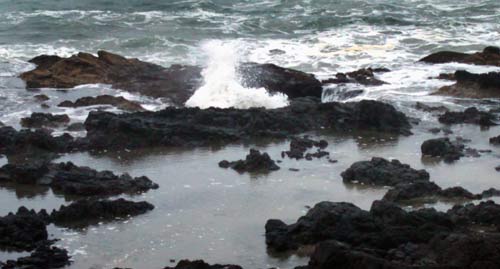 Today's #OregonCoast: video of Thor's Well, near Yachats, getting walloped by waves. Next to Cook's Chasm. Note how the "well" bubbles up on its own with sea water coming out of it. More on this https://www.beachconnection.net/vtour_upperlane.htm ..... #Oregon #northwest #portland #travel #beaches