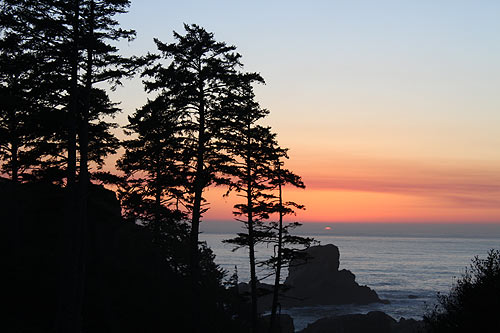 This day-use area is just north of the city limits, after a mile and a half drive through a thick forest - after the signs proclaiming the park’s entrance.

The main section of the park is Ecola Point, where numerous viewpoints offer you glimpses of Cannon Beach, Haystack Rock and the lighthouse. It’s a popular spot for whale watching during the twice-yearly migrations.

There is also a trailhead leading over another bluff to Indian Beach - another mile away.

Oregon Itineraries, Day Trips and Tours on the Coast There's Ecola State Park at the north end of town, where stunning vistas abound. Next to the park, Tillamook Head is the vast, rugged headland that

Cannon Beach, Oregon Complete Guide - on the Oregon Coast At the northern end of Ecola State Park, another 1.5 miles after the main part of the park, you'll find a crescent-shaped beach filled with ...

Finding the Hidden Beaches on Oregon's Busy Coast Apr 14, 2009 ... But there are some parts that are less populated, like the very northern end, near the southern face of the cliffs of Ecola State Park