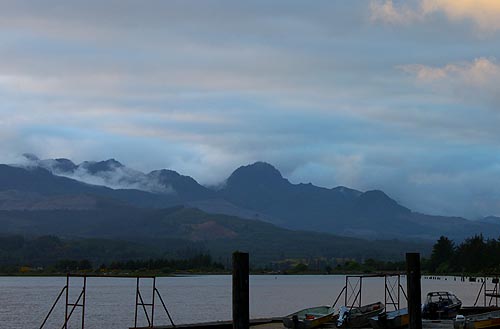 One seriously popular pastime on the coast is antique shopping, and on Wheeler’s waterfront lies what could be a kind of Mecca for treasure hunters. With four antique shops in its six or so blocks, that apparently makes antiquing its largest industry.

(Here's one kooky item found once at Wheeler Station. A "neat teen?" As opposed to what - the "sloppy, juvenile delinquent teen?")

The oddest, kitschiest things pop up at Wheeler Station – and big, too. A giant horse-drawn sleigh, enormous gas pumps or huge advertising signs have all made appearances (now you know where neighborhood dive bars get their décor). You may find a rounded, pseudo-futuristic TV set from the '70s, or that clunky little record player for a child you had as a kid in the '60s or '70s.

Wheeler Station was until the 2000's one of two antique shops in town. The other was Pieffenschneider, which for a time was also the liquor store. But when that neighboring space became vacant, owners Sandy and Pat Sandhagen knocked out the wall between the two. Now, at some 10,000 square feet, Wheeler Station is a massive, meandering labyrinth of various rooms, all crammed with collectibles of beauty or varying degrees of chuckle-inducing kitsch.

From a 2004 interview with Oregon Coast Beach Connection:

Pat admits it’s so big people really do get lost. “That’s why we have the intercom,” she said. “We’ve had to use it several times when some man was looking for his wife.”