(Yachats, Oregon) - At Neptune State Scenic Viewpoint, in the dramatic stretch of beaches and cliffs between Yachats and Florence, there’s a simple cave in the cliffs. As far as caves go, it’s just a tad more interesting than many on the Oregon coast because of the odd colors within, and the fact it’s actually big enough for you to walk inside. 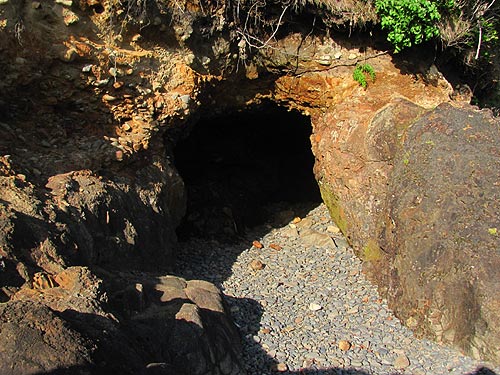 The cave tells a larger, stranger tale, however, as do the chunks of rock surrounding it. It's an ancient story of towering volcanoes and some underwater eruptions, searing lava flows, continents drifting over millions of years, and of little creatures doing remarkably large-scale damage.

The rock the cave is made up of is a bit puzzling, certainly in color. It gives the impression of some sort of sandstone, but it’s likely a form of basalt with other things mixed in – a breccia or a conglomerate, depending on a number of factors. A sandstone cave would not last very long, but documentation about this one goes back decades.

The reddish color could come from either a lot of iron in the mix or from whatever else comprises this mix of basalt and other rocks.

Seaside resident and geologist Tom Horning thinks this basalt could include sandstone or a mix of mostly sediments and sandstone – he wasn’t there personally and only saw photos provided to him by Oregon Coast Beach Connection.

Lots of things could cause a mixed rock structure like a conglomerate or breccia to turn reddish in color. 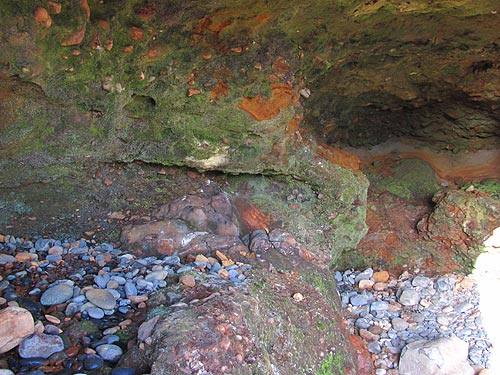 “It is possible that a conglomerate could weather, oxidize its matrix, and leave its rock fragments as resistant cobbles and pebbles, provided that they are hard and resistant to the penetration of corrosive water, in contrast to the open vulnerable matrix,” Horning said. “This would be akin to soaking raisin bread in water and having raisins resting in soft mush afterward.”

The Yachats area is quite a mish-mash of geologic forces. Much of it has to do with massive lava flows from local volcanoes 50 million years ago. Various volcanoes in this area created a lot of what you see here, many of them underwater at the time. Cape Perpetua itself is an ancient volcano that died out perhaps 40 million years ago - and it's responsible for a lot of the basalt you see right now. But some were submarine eruptions. More on Yachats / Cape Perpetua geology

Cape Perpetua was a local volcano back then, like Lincoln City's Cascade Head - a "true blue coastal volcano" as Horning put it. 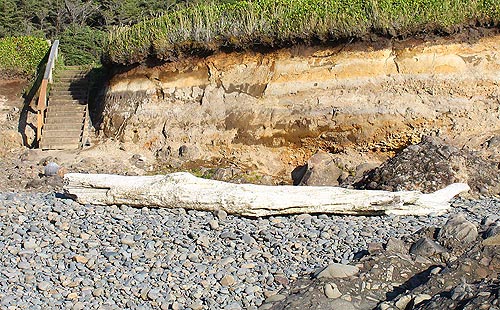 Consequently, the rocky formations in and around Yachats and Neptune State Scenic Viewpoint are quite varied. Some of the tidepool spots here are black and others get a bit more reddish, depending on how they were created. Then you can literally look back in time some 80,000 years by looking at the mostly-sandstone cliffs that rise above the beach: each layer tells a different geologic tale over these millennia. Parts of those layers were actually seabeds at one time.

The bulk of the black rock you see around Yachats is Eocene era – about 50 million years old. 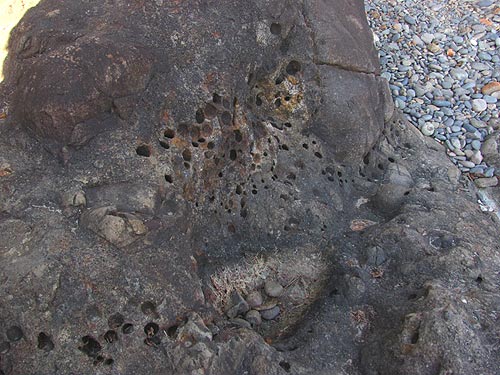 Then another curious aspect arises in this area, if you look close. The basalt rock surrounding the cave – which Horning said is the bedrock of the area – has hundreds of little pits.

What on Earth (or beneath it) could cause such a hard surface as basalt to get little holes in it?

“The holes have been drilled by rock-boring clams in the softer matrix,” Horning said.

It’s a bit like some alien movie: some creature has burrowed its way into the rock and thousands of them are living there.

“These clams are adapted to growing in rock crevices and pits, then working their shells to grind open a bigger hole through time so they can grow,” Horning said. “At Cannon Beach’s Haystack Rock, they can drill into mudstone and mixed explosive breccias where the lavas hit cold water and shattered, but they cannot drill into hard basalt, as it is too tough for them. They contribute to the erosion of the bedrock and their pits provide all sorts of micro-habitat niches for other creatures after the clams die.”