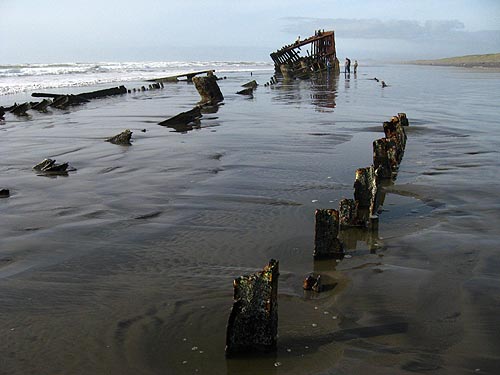 Accessible by Peter Iredale Road from inside Fort Stevens State Park, the wreck is part of the massive park - one of the largest in the state.

Various parts of the Wreck of the Peter Iredale appear at different times of year, thanks to sand levels. Of course tides make a difference as well.

The lower part of the ship, now entirely under the sand, allows only views of the very tops of the structure. Even then, this can disappear in summer's higher sand levels.

If the tide safely allows, people tend to climb all over the rusted bones of the giant schooner.

The bottom photo, taken on the first day of summer at sunset, shows another favorite view of the elderly structure. People love their sunset shots of the shipwreck's silhouette.

Note:driving on the beach from here southward is legal, but not north of Peter Iredale Road.


To Previous Stop
More to History of Oregon Coast's Peter Iredale Than Just a Shipwreck :
To Next Stop
Sunset Beach, between Warrenton and Gearhart
Back to Astoria, Warrenton, Gearhart Virtual Tour